As I’ve been reading through the New Testament, I’ve had to reflect on the idea of willingly leaving everything behind to do the Lord’s Will. Whether it is to unknown success or an undertaking of great pain, how dedicated are you to a life like Christ?

Humans are selfish beings. We often put our own preservation, desires, and needs before others. In some way, the entire concept of Christianity is telling us to focus less on ourselves and more on others to live a happy life. Jesus said that to follow Him is a life of sacrifice with great rewards in the afterlife. So, a question that I’ve been pondering has been, “how much am I willing to sacrifice”?

When we talk about the ultimate price, we immediately focus on Jesus. He was the “Son of Man” but also the “Son of God”. Sometimes I feel that we focus too much on one and not enough on the other. We reduce the signs of humanity in Jesus’ life that makes Him relatable and a guide for us. Jesus got angry, sad, confused, frustrated, and even was apprehensive about His impending crucifixion, but at the same time, He resigned Himself to God’s Will, not His own.

Another Biblical example was the Apostle Paul. Paul literally traveled over the entirety of Europe and Asia teaching the Gospel to Jews and Greeks alike then went home purposely to Jerusalem to be betrayed by his own people. This wasn’t a surprise at all, many people prophesied to him on his journey back, but he went to his own sentencing willfully because it was God’s will. 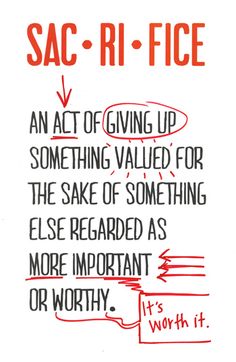 These stories really resonated but it didn’t hit home until I thought about a more contemporary example, Dr. Martin Luther King Jr. During the I’ve Been to the Mountaintop Speech (I covered it In Honor of Martin a few months ago), it is apparent that he knew he was going to die. I am still in awe from his resignation that his death was coming. I can never get over the sound of his voice, the somewhat sad but optimistic tone that he carried through his speech. I question myself, could I do the same?

This is not to say that I expect to be in the same position one day, but it does make me reflect on how much I trust the one I call my Lord and Savior. Those are extreme examples of trust and sacrifice but what about less intense degrees? Could I leave a job, house, and all my possessions to follow Christ? Could I give up my family to save lives? Could I let my entire life be upturned for a chance to do something that will benefit the Father? Could I live a life filled with mistreatment and prosecution in exchange for changing the world we live in? I want to say yes, but I will never know.

Sacrifice is a weird thing but it also makes me think about the love it takes to give up something for another person. That love must be overflowing to leave behind everything that matters to you because of something larger.  It also helps me work on faith to trust my father with my life, even if I occasionally have doubts. Life is full of surprises, spontaneity, and lessons. But to those that have made sacrifices for others, I want to say thank you.

Turn your Brightness Up!